Blow out preventers can make the difference between safety and disaster at offshore drilling sites. Installed to protect lives and the environment, there can be no room for error. MacArtney’s new American Petroleum Institute (API) approved connector helps ensure Hydril’s new blow out preventer system will function if needed.

Blow out preventers can make the difference between safety and disaster at offshore drilling sites. Installed to protect lives and the environment, there can be no room for error. MacArtney’s new American Petroleum Institute (API) approved connector helps ensure Hydril’s new blow out preventer system will function if needed.

When failure cannot lead to disaster

Critical to safety and to the environment, blow out preventers, or BOPs, are advanced valves that react to sudden pressure at an oil well, shutting down the well and averting blow outs. They are essential for preventing loss of life at drilling sites and for stopping leaks that are potentially catastrophic for personnel, for the environment and financially.

Automatic BOP systems constantly monitor the well and are designed to be fail-safe devices. Not only must they be periodically inspected and tested, the American Petroleum Institute sets standards that are clear about the types of risks against which such equipment must be protected. New designs are rigorously tested and certified and each element must meet stringent requirements before being API certified.

The size of the preventers and the depth at which they are deployed makes them impractical to bring to the surface often for testing. And as drilling sites are in increasingly deeper waters, BOPs have become more advanced. They must withstand the increased pressures at depth and they must also be reliable enough to permit increased intervals between tests or servicing. Systems and equipment on the BOP can be submerged for up to a year between servicing and must therefore be resilient to the harsh underwater environment. 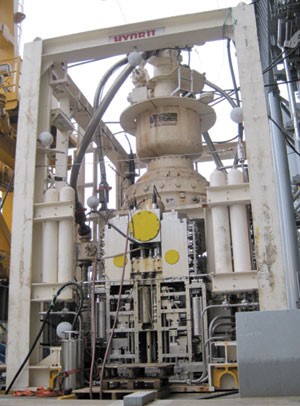 When Hydril was designing their new BOP Control System, they needed a complete infrastructure package that met the strict standards for testing and reliability stipulated by the American Petroleum Institute. The connector system within the complete unit needed be able to withstand submersion for extended periods and accommodate several failure modes stipulated in the American Petroleum Institute Pressure Controls guidelines.

These stipulations included the requirement for the umbilical or termination assembly to function even when fully flooded with seawater and continue to operate for an extended period without conductor failure. A comprehensive design, build, test and deploy, programme was implemented to fulfil the requirements of outfitting Hydril with three rig packages and just as many spares and test units. The brief was to fulfil American Petroleum Institute standards 16D for testing when assembled and the harder to attain 17E for functionality when flooded.

Ensuring that connectors for the infrastructure system would function even if the cable was flooded required the combination of several design features. A boot was fitted behind the connector to ensure that any water entering the cable cannot penetrate to the connector and the connector will continue to work for its intended lifespan even with water flooding in the cable right up to the boot.

For 17E standard certification, the cable is as important as the connector. The cable was selected for its ability to withstand wear underwater. The conductors inside the cable are also protected to prevent water ingress shorting the connections.

Critical to the design was ensuring that the connector could be tested for integrity once assembled. MacArtney designed and integrated double test ports on the API connector itself to allow pressure testing of both sections after mating and before the connection is lowered into the water.

Thorough testing at each stage

Each system needed to be fail-proof on delivery and was tested at various stages of production and completion. Every element in the cable was tested individually before construction to ensure that they were entirely intact and fully functional. The cable, and then the connector and cable were pressure tested before completion. The entire cable and connector unit were ultimately pressure tested prior to inclusion in the infrastructure package.

The birth of a new range