In response to growing needs in the ROV industry, SubConn® has developed and manufactured a new combined power and data cable. ROVs and other underwater equipment can now be powered through the same cable used for data transfer.

Until now, the internal wiring for Ethernet sensors on ROVs required 2 cables – one for powering instruments and one for transferring data.

In response to the need for a combination cable, leading manufacturer, SubConn®, has developed and introduced a combined Power/Ethernet Cable to its Ethernet range.

Both functions are now performed by a specially designed 13 contact connector that is capable of up to 1 Gbit/s data transmission over 75 metres of specialised underwater cable. 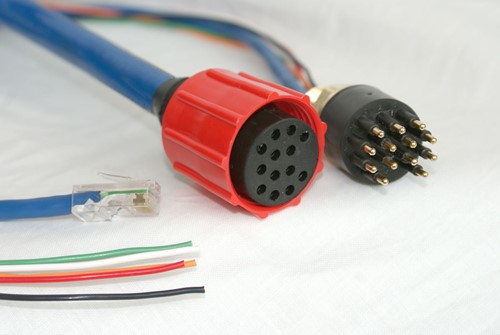 Reducing from 2 cables to 1 represents savings both in terms of space, as the connector has the same dimensions as the existing single function version, and in terms of economy. The combined cable is less expensive than purchasing the two single function cables.

The first orders for the full ocean depth rated combined Ethernet cable have already been received from ROV manufacturers.

The combined cable can be ordered from stock and is available in several lengths of ready cable harnesses. Mateable bulkhead connectors are also stock items for day-to-day shipment.

The combined cable is the latest addition to the successful Ethernet range introduced approximately a year and a half ago and is based on cable specially made for the SubConn® Ethernet programme.

SubConn® Inc. and The MacArtney Underwater Technology Group have been supplying the world's leading range of underwater pluggable electrical connectors to the demanding underwater industry for over 30 years.