Previously much has been written about the TRIAXUS ROTV - its scope and versatility are testament to the vital nature of its role, in the world of Ocean Science. 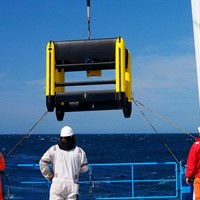 Previously much has been written about the TRIAXUS ROTV - its scope and versatility are testament to the vital nature of its role, in the world of Ocean Science.

Over the centuries, our human understanding of the physical and biological aspects of the ocean has made huge advancements. From initial observations of the tides made by Aristotle and Strabo to Benjamin Franklin’s first scientific study of the gulf steam, made by measuring water temperatures during his Atlantic crossings, our understanding of our oceans has valuably increased.

Now with the MacArtney TRIAXUS ROTV aboard research vessels like the RV Investigator we are able to push the boundaries of our understanding.

MacArtney has recently supplied a second system for use on RV Investigator, This TRIAXUS E version features an even higher payload capacity and enables the installation of a wide range of sensors targeted to the specific needs of oceanographic research. The scope of supply from MacArtney in this case included:

Custom sensor packages supported by the NEXUS fibre optic multiplexer and MMI (Man Machine Interface) mean the TRIAXUS can be programmed topside to perform various functions and undulations whilst being towed. Fibre optic umbilical cabling allows for the feedback of data in real time. Specially developed for this high-speed oceanographic data acquisition work the TRIAXUS provides a versatile and seamless system.

The continued utilisation of MacArtney’s TRIAXUS system within the Ocean Science industry is a testament to the vital and versatile work accomplished by the TRIAXUS ROTV - adding value to scientific advancements that will help to shape our future understandings of the ocean world and its hidden depths.

“The Commonwealth Scientific and Industrial Research Organisation (CSIRO) use a Triaxus system on-board their advanced blue water platform, RV Investigator. CSIRO has developed the following animation describing its use, as well as many other capabilities of the ship:”