In potentially the biggest change in recent fishing history, a new trawling method stands to have a double benefit for fishermen, reducing fuel costs by half and improving catch quality. The new method that eliminates chain dragging on the seabed also protects the seafloor environment and reduces unwanted species catch.

In potentially the biggest change in recent fishing history, a new trawling method stands to have a double benefit for fishermen, reducing fuel costs by half and improving catch quality.

The new method that eliminates chain dragging on the seabed also protects the seafloor environment and reduces unwanted species catch.

Fishing is a tough industry and keeping costs down is essential for ensuring economic viability. Traditional trawling methods for catching flatfish require high levels of power to drag a network of a steel beam with chains along the sea floor to scoop up fish from the sea bed.

Dragging these enormous, heavy systems across the mud, sand, rocks and other seafloor surfaces can cost up to 20,000 litres of fuel a week on trawling vessels.

The new trawling system, the Sumwing, can cut fuel consumption by 50%.

The revolutionary trawling boom glides above the sea floor using the same technique as an aerofoil on an aeroplane. Instead of steel chains, a number of streamers are attached to the Sumwing. The streamers send out bursts of electrical pulses that make fish swim up from the floor bed and into the path of the gliding net. Drag from the seabed is eliminated and fuel consumption dramatically reduced. 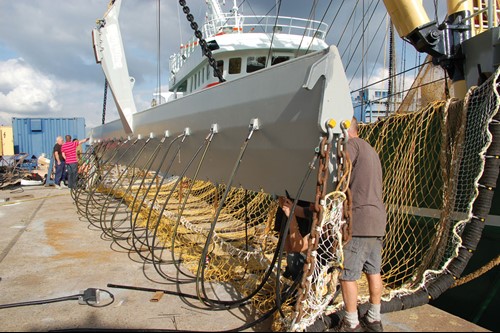 Getting fish in the net is just one aspect to fishing. The value of a catch is dependent on the condition of the fish because the fish that are caught need to be in good enough condition to be sold. Chain trawling can cause bruising and damage to the fish, which makes them unfit for sale as whole fish, lowering the value of the entire catch.

The new Sumwing eliminates the dragging damage caused by chains. It stuns the fish up from the seafloor without touching or dragging, leaving the fish intact and conserving the value of the catch.

Avoids unwanted species catch and protects seabed Traditional trawling methods drag everything up from the seabed regardless of species. The catch can often include unwanted fish types, star fish and corals. The damage caused by the trawler can also be extensive as the top layer of seabed is dragged up. This damage could have long term issues in areas where corals and other seabed species are endangered.

By gliding above the sea floor, the Sumwing avoids contact with coral and seabed based life. Sea urchins, starfish and other unwanted seafloor life are not dragged up from the seabed. The seafloor is also spared the disruption caused when swept by chains.

The ingenious Sumwing system was designed by HFK Engineering with technical assistance and advice from the engineers at MacArtney Benelux BV. The Dutch subsidiary of the MacArtney Underwater Technology Group has the exclusive rights to produce and supply the Sumwing system worldwide and has invested in advanced production techniques to ensure quality and uniformity. MacArtney Benelux has supplied systems for 3 vessels in 2009 and have already received orders for 2010.