MacArtney takes home yet another award

Less than two months after being named 'Pioneer Company of the Year' by the renowned Danish business newspaper, Borsen, MacArtney has been announced as regional winner of the international growth competition, 'EY Entrepreneur of the Year'.

Growth runs deep
"MacArtney is a really good example of the fact that the Danish maritime sector has much more to offer than merely world class container shipping" says Carsten Collin, Partner and Director at EY Entrepreneur of the Year, and continues: "MacArtney takes on immensely complex tasks for clients within different oil, gas, defence and science industries and works their way around underwater challenges which previously remained unresolved - and that is innovation in its highest potency. "From my perspective, MacArtney truly deserves this title" says Carsten Collin - who describes the scope and character of MacArtney solutions as 'turning underwater science fiction into reality'.

In 2013, 952 Danish companies met the initial requirements for winning the title, of which 150 companies were singled out by an independent team of experts. Among these, six regional winners were announced - hereunder MacArtney (South West Denmark).

"MacArtney is extremely proud to be named among the drivers of the positive development which continues to characterise maritime business here in South West Denmark" - says MacArtney Sales and Marketing Director, Marco MacArtney, and continues: "the spirit of entrepreneurship and the constant pursuit of global growth through new challenges and solutions are values that well describe what we do at MacArtney". 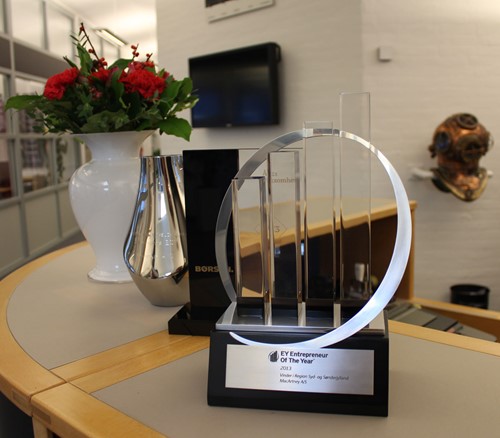