The FPSO slip rings are designated for the 'Martin Linge' project on the Norwegian Continental Shelf due west of Bergen. Here, they will add to several innovative solutions and technologies designed to reduce CO₂ emissions and environmental impacts of the Martin Linge field, which, in turn, aims to open a new era of sustainable oil and gas production in the Norwegian North Sea.

Scope of MacArtney supply
Due for delivery in the second quarter of 2015, the MacArtney scope of supply encompasses one low voltage electrical optical slip ring, one medium voltage electrical slip ring, one pedestal (mounted between the slip rings for improved cable access), one batch of turret side cable assemblies and four junction boxes to be mounted on the geostationary part for the FPSO turret.

Martin Linge
Named after the late Norwegian actor, captain and World War II hero of the same name, the Martin Linge project is operated by French oil and gas company, Total, and is expected to start production in 2016 with a capacity of 80,000 barrels of oil equivalent per day. Total holds a 51% interest in the project. Its partners are Petoro (30%) and Statoil (19%).

The development of this offshore oil and condensate gas field lying on less than 115 m of water began in early 2012. It involves the construction of an integrated wellhead, production and accommodations platform. Gas from the field will be exported to the UK via the FUKA gas pipeline. 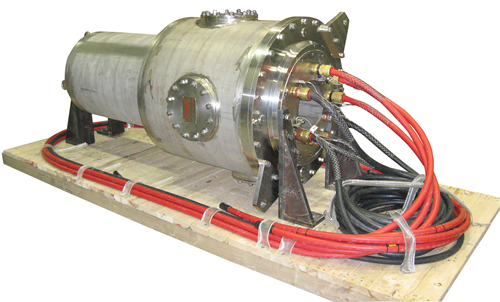