MacArtney’s unique, modular hubs make installation on the seafloor easier and faster and offer a practical flexibility not previously possible.

Renewable energy power from offshore renewable devices once captured needs transferring to the power grid onshore. For many projects in the development stage, this has meant single inline terminations to export cables that transfer energy onshore. As projects progress, these single devices are often replaced by arrays of devices achieving an economy of scale in renewable energy capture. Underwater hubs, or UTUs (underwater termination units), placed on the seabed assimilate power input from several devices and transfer the renewable energy onshore.

Flexible building bricks
Choosing the right hub system can be crucial for a project. Hubs need to be reliable and easy to install as ship time is enormously expensive. And as many offshore renewable capture projects are still learning from experience, having hub devices that offer flexibility at the outset and a viable option for retrieval, adaption and re-installation can prove valuable in the short and long term.
MacArtney hubs are made up of a number of modules and can house as many cables as practically possible. Each module houses a cable termination and is mechanically linked to other modules. For example, a 3 cable version is made up of 2 modules with power entering the hub and 1 module for the export cable.

Extra sections can be added at initial launch or at a later date, making the hub a flexible option over time. 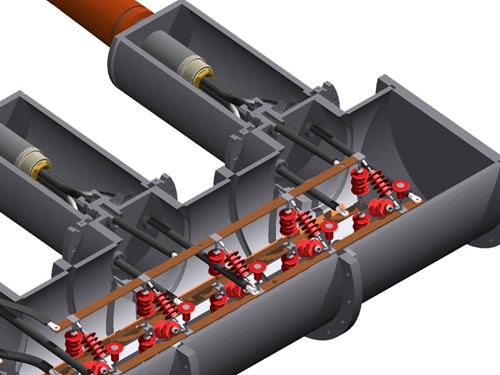 Mechanical connection for reduced operational time
Keeping operational time for terminations to a minimum is essential. The innovative hub design from MacArtney is connector based and all connections are mechanical, eliminating the need for moulding and drying and making on-vessel preparations much faster, easier and more efficient.

As bolts and flanges have replaced cutting, splicing and terminations, should a hub need dismounting and mounting again, it merely needs to be raised, unbolted, fitted with a protective flange, re-bolted and lowered again. This makes later adjustments and additions comparatively fast and straightforward.

Safe system launch
Lowering devices down to the sea floor requires precision and control. The cable entry point is potentially a vulnerable point and ensuring that the cable does not end up underneath the device is essential.

All cable connections on MacArtney’s design enter the hub on the same side. Having just one side with cable connections makes the hub easier to handle after termination and eliminates the risk of the hub landing on the cable as it is lowered to the sea bed.

Experimental stages – need to retrieve and launch again
Their mechanical nature makes it easier to detach a single connection and attach it again. This is also a practical solution in the experimental stages of a project where adjustments or corrections may need to be made. There are often many new technologies in new offshore renewable energy converters and there is a clear advantage in employing already proven reliable components where possible. MacArtney is expert in encapsulating already reliable components and the technology in this new hub design is based heavily on tried and trusted in-line termination designs and components.

Rugged for long life
Subsea power hubs can be used both with wave energy converters, typically located close to shore, and with tidal and wind energy capture. They are typically constructed from black iron S355 painted and with sacrificial anodes for protection against seawater erosion, though other materials are also available. MacArtney Underwater Technology has been working with subsea power transfer for decades and has successfully transferred 30 years of expertise to the offshore renewable energy capture industry.