Spearheaded by its local operations in the Netherlands, MacArtney is thrilled to support the WASUB human-powered submarine team of the Delft University of Technology (TUDelft). Drawing on their extensive experience with underwater systems and vehicles, MacArtney engineers will put their know-how at the disposal of the WASUB team, as they prepare their WASUB 4 vessel for launching a serious title bid at the European International Submarine Races (eISR) this summer.The WASUB 4 will also be using MacArtney underwater connectors and cables for interfacing and empowering various onboard functions. 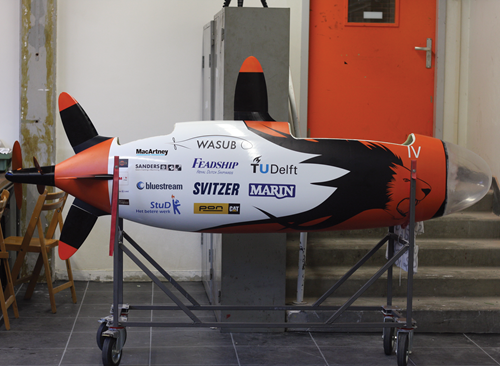 The WASUB team
The WASUB team comprises 17 students of Delft University of Technology who are designing, building and racing a human-powered submarine. The history of the WASUB team begins back in 2004 when there was a design thesis exercise at the faculty of AerospaceEngineering about the WASUB. When the design thesis exercise was a success, the students decided that they wanted to compete in the International Submarine Races (ISR) 2005, where the WASUB 1 team won the one person propeller category and the slalom. The WASUB 1 was succeeded by WASUB 2 and after short break, by the WASUB 3 which performed well at the 2013 version of ISR. This year, however, the young, talented and ambitions students that make up the WASUB 4 team have their sights set on the grand prize, when the eISR kicks off on the 7th June.

The eISR
The second biennial European International Submarine Race (eISR) will be held in Gosport, England and will see teams of University students race their human-powered submarines against the clock around a demanding course in a unique sporting and engineering challenge.

While the ISR, which is held in the USA is all about speed and going in a straight line, the eISR course includes a U-curve, a full stop and a slalom - and this renders submarine controls alpha and omega.

MacArtney underwater electronics and connectivity
In order to provide the submarine pilot (a diver using a bicycle mechanism to generate forward thrust) with optimal conditions for successfully steering the submarine through the course while also effectively functioning as the vessel engine, the flaps on the WASUB 4 are fitted with servo motors. These servo motors make up the backbone of the WASUB 4 steering element, however, they depend on standard electronics to work perfectly under water. In their role as experts on electronics underwater, MacArtney engineers provided valuable advice for the WASUB team on this matter. Moreover, MacArtney contributed with advice on water resistance and not least, with SubConn® underwater connectors, assemblies and cables for the WASUB 4.

"The WASUB is all about combining strengths and applying theory, knowledge and hands on experience in order to craft a successful system" says Ron Voerman, Managing Director at MacArtney Benelux and continues: "We support this mentality at MacArtney and we are truly delighted to be able to assist these creative and talented young marine professionals of the future - as they venture for success at the eISR".