Spearheaded by oceanographic experts from German Group Operations MBT GmbH, MacArtney has delivered the full connectivity package for the innovative UFO (Underwater Fish Observatory) that was recently deployed in the North Sea. 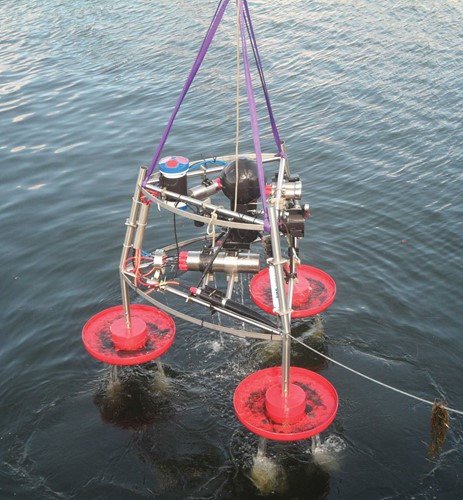 To ensure the best performance and results when it comes to interfacing the sensors and transmitting the gathered data back to the surface, the UFO project relies on a complete connectivity package from MacArtney

The UFO project - joining forces in the name of ocean science
Realised through successful cooperation between the Hamburg based Thünen Institute of Sea Fisheries, the Department of Computer Science and Electrical Engineering, the Development Center at the University of Applied Sciences in Kiel and MBT GmbH - the UFO project marks a noticeable leap forward in fish monitoring technology and methodology.

A novel approach to fish monitoring
Basically, the UFO project provides an underwater observatory for the quantitative determination of fish stocks. Specifically, the UFO project is based on a rugged subsea lander boasting multiple oceanographic sensors and high-tech equipment. The purpose of this lander is to measure fish stocks by means of stationary monitoring with optical and acoustic technology. The novel approach provided by the UFO project is the purely observational and therefore non-invasive method applied. The successful application of this method is intended to significantly reduce cost and labour-intensive sampling catches.

Advanced oceanographic sensor technology requires a good connectivity package
The UFO system observes fish using a combination of high-resolution sonar system imagery and footage captured with extremely light-sensitive stereo installed underwater cameras, originally known from military applications. Together, these systems automatically register the passing fish, without having any influence on fish stocks in the area examined. Further sensor systems on board the UFO lander include a turbidity sensor, a current meter, conductivity and pressure sensors and a receiver for fish tag signals (fish tracking). The combination of the camera, sonar and sensor data provides comprehensive information about fish characteristics as well as the detection of fish stocks.

The FINO3 plat form in the North Sea

This way, the successful combination of this wide palette of sensors renders the UFO lander a very powerful and efficient oceanographic monitoring system. However, in order to ensure the best performance and results when it comes to interfacing the sensors and transmitting the gathered data back to the surface, the UFO project relies on a complete connectivity package from MacArtney. All sensors are interfaced by SubConn® connectors and MacArtney cable assemblies hooked up to a MacArtney NEXUS MK C multiplexer, which is, in turn, linked to topside via a modified MacArtney TrustLink chamber termination and a 500 metre armoured fibre optic signal and power cable.

Beyond providing signal and data infrastructure between sensors, topside and seabed, the MacArtney connectivity system also allows operators to trigger a pop-up recovery buoy to be deployed after the operational phase.

The UFO has landed
In late 2014 - the lander was installed in about 300 metres distance to the FINO3 platform which is one of three fixed research platforms in the North Sea and Baltic Sea. Operated by the research and development center of the University of Applied Sciences, Kiel, the site is located about 80 km west of Sylt. The platform serves the realisation of research and technology projects from various universities and companies and is surrounded by a protective zone where fishing vessel entry is banned. The UFO was installed by divers, who adjusted the lander under water in order to ensure proper operation. Afterwards, the cable was laid to the FINO3 platform and the topside end of the cable was inserted into the platform tower and connected to a junction box. A first operational test proved successful and even allowed the first snap shots of a school of fish captured within the live image from the cameras.