MacArtney Underwater Technology is delighted to supply SubConn underwater connectivity solutions for the cutting-edge, bow mounted sonar systems that are essential to the impressive undersea threat detection and response capability of the advanced FREMM frigates currently operated by the French, Italian and Moroccan navies.

MacArtney Underwater Technology is delighted to supply SubConn® underwater connectivity solutions for the cutting-edge, bow mounted sonar systems that are essential to the impressive undersea threat detection and response capability of the advanced FREMM frigates currently operated by the French, Italian and Moroccan navies. In close cooperation with leading naval defence technology contractors; Thales (France) and WASS* (Italy), MacArtney has designed and delivered the outboard and inboard cable and connector solutions that interface all sonar elements and connect these to the onboard communications and power network.

The vessels
The FREMM name represents a class of European multipurpose frigates designed by DCNS (France) and Orizzonte Sistemi Navali (Italy). The FREMM programme was launched in 2005 and is run by OCCAR (European joint armaments cooperation organisation) with DCNS as the prime contractor. The objective of the programme was to replace existing navy frigates with new 6,000-tonne vessels, equipped with the most modern warfare systems. The first ship of the class, the Aquitaine, was commissioned in 2012 and so far, a total of 21 ships are on order. FREMM frigates are considered to be among the most technologically advanced, adaptable and competitively priced vessels on the world market. Depending on the specific module and mission configuration, these potent warships carry weapon systems capable of dealing with almost any subsea, surface, land and air based adversary.

The sonar
With a system supply spanning the Herakles multifunction radar, the Artemis infrared search and track system, various electronic warfare and communication systems along with an extensive sonar suite, Thales has made a significant contribution to the multi-mission capabilities of FREMM frigates.

Installed onboard the vessel, the Thales sonar suite offers unparalleled performance levels including very high anti-submarine detection ranges and efficient simultaneous torpedo defence capabilities. The suite combines the UMS 4110 CL bow mounted sonar and the towed CAPTAS 4 variable depth sonar. The UMS 4110 CL is a long range system for offensive anti-submarine warfare (ASW) and self-protection. It is designed for multi-mode operation and can simultaneously operate two active channels (ASW transmission modes) as well as passive channels for listening only - or for the tracking of torpedoes. It also has the capability to carry out obstacle avoidance. The UMS 4110 CL draws on the very latest underwater acoustic and sonar architecture technologies, granting FREMM frigates cutting-edge capabilities for detection in all types of environments and in the face of increasingly diverse threats.

The connectivity
FREMM frigates offer a low through-life cost that is unequalled for a 6,000 t warship. Primarily, this is achieved by selecting the most reliable, high-performance and cost efficient components available and by taking into account, at conception, all system maintenance needs. It was these principles that governed the choice of a SubConn® connectivity solution to interface the bow mounted sonar system.

Specifically, MacArtney supplies the inboard lead-in cables running from the sonar dome (bulbous bow) to a central hub within the hull of the ship. Moreover, MacArtney supplied the outboard SubConn® underwater connectivity harnesses providing the power and signal interface for all sonar elements within the sonar dome. Underwater connectors were needed for this job, as the dome (which is manufactured partly from reinforced rubber that is transparent to acoustic signal) is flooded with chlorinated water in order to maintain its shape. A total of 96 outboard harness cables were delivered, each featuring 5 power and signal outlets (2-pin SubConn® connectors) for plugging into sonar elements - and one SubConn® connector for interfacing with the inboard system at the opposite end.

In order to eliminate risk of corrosion, all the SubConn® connectors supplied were of the non-metallic PEEK type. While all cables were manufactured with a specially designed polyurethane jacket, the inboard cables were made from halogen free polyurethane material. All cables and connectors were tested to 4.5 kV.

* Under license agreement with Thales, WASS manufactures the sonar system for all Italian FREMM vessels. 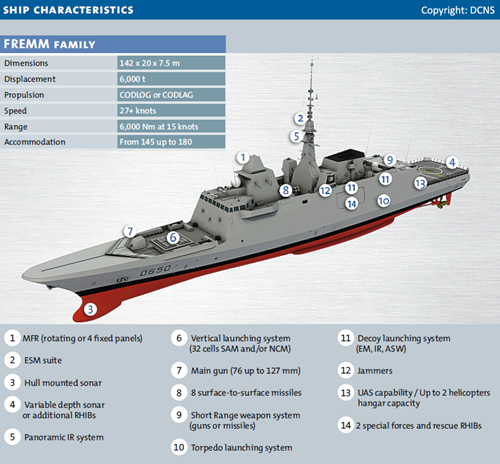