Off the coast of the Dunwich in Suffolk lies half a medieval town long since abandoned to the encroaching sea. Despite many diver and sonar surveys, the extent and detail of the well-known site are still unknown as poor visibility frustrates its study.

Off the coast of the Dunwich in Suffolk lies half a medieval town long since abandoned to the encroaching sea. Despite many diver and sonar surveys, the extent and detail of the well-known site are still unknown as poor visibility frustrates its study.

In June 2010, acoustic imaging technology was introduced to archaeological survey of the site, revealing hitherto unknown detail of the underwater remains.

Hidden secrets from the past

The site of the sunken town of Dunwich has been the subject of debate for several centuries and the question of how much of the ancient capital of East Anglia remains just off the coast has been the subject of countless diving and archaeology projects. Since the 1300’s, historic buildings have been lost to the relentless encroachment of the North Sea but attempts to gain any detailed view of what lies beneath the water, the silt and the sand off the coast have been frustrated by the poor visibility near the seabed.

Tidal and wave currents keep fine sediments from the seabed in suspension, causing the very poor visibility within lower metres of the seawater that limits diving and hampers archaeological survey. This is a particular problem off Dunwich because the site is dispersed over the seabed and many of the remains are fragmentary.

Conventional optical systems generate blank screens in such conditions and the industry has turned to sonar imaging as an alternative. Modern side scan sonar and multi-beam echo sounders have located and visualised the site but the resolution is limited and the images lack the detail needed to differentiate carved stonework or building materials from naturally occurring geological formations.

Although considerable advances in side scan sonar and multibeam echo sounders have enabled detection and visualisation of wrecks and sea floor sediments, these are still limited by resolution. Diver survey is still required to identify targets where the remains are not discrete wrecks. 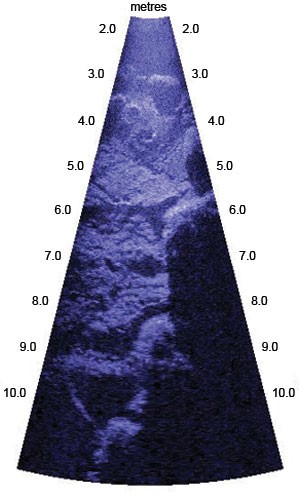 In June 2010, a team working with the BBC and MacArtney Underwater Technology employed new technology to examine the Dunwich site. Marine Archaeology Professor, David Sear, based at the University of Southampton’s School of Geography teamed up with divers including Andy Rose from the diving instructor company, Learn Scuba, based in Lowestoft, and enlisted the help of sonar imaging expert, Mike Sawkins from the MacArtney Underwater Technology Group. They deployed a special sonar camera, the diver held (or DH) DIDSON.

Each diver clipped onto a shot line which had been previously positioned over the ruins using GPS navigation and side scan sonar data. The divers could then undertake circular sweeps of the sea bed around the shot line, gradually increasing their radius of survey. A set of data was taken hanging over the ruins at a distance of between 8-15 metres and the second set for close up visualisation at 1-5 metres within the ruins.

The combination of high frequencies, acoustic lenses and very narrow beams increased the image detail and gave archaeologists greater detail of the site than ever before available:

"The DIDSON diver held system enabled us to see for the first time the worked and rubble masonry on the seabed from the ruins of St Katherines Chapel and St Nicholas Church lost to the sea in c.1550 and 1480 respectively. This ability starts to open up the options for marine archaeology in near shore shallow turbid waters around coasts,” explained Professor Sear from the University of Southampton’s School of Geography

Recent surveys of the coastline of the UK have highlighted the extent of non-wreck marine archaeology associated with buildings and settlements that to date are unprotected by law and largely unexplored. Such areas are often subject to development and as such require effective techniques for assessing heritage and archaeology as part of development control and planning.

This field trial, which was the first ever use of the DIDSON imaging system for non-wreck marine archaeology, could change the way archaeologists examine offshore sites where visibility is low, especially where the coastline is silted by rivers or eroded away by the sea.