In June of 2013, a dedicated team of oceanographers and astrobiologists onboard the Schmidt Ocean Institute research vessel, R/V Falkor, set sail on the two-leg Oases 2013 cruise to explore the Mid Cayman Rise.

In June of 2013, a dedicated team of oceanographers and astrobiologists onboard the Schmidt Ocean Institute research vessel, R/V Falkor, set sail on the two-leg Oases 2013 cruise to explore the Mid Cayman Rise.

In depth exploration and understanding
Empowered by the Nereus - a Woods Hole Oceanographic Institution (WHOI) hybrid remotely operated vehicle (HROV), scientists searched for life and geochemical phenomenon in this extreme seafloor environment. The one-of-a-kind Nereus, which in 2009 visited the deepest parts of the Mariana Trench, allowed scientists to extend their investigations throughout the very depths of the Mid Cayman Rise, which reaches to more than 6,500 metres depth.

Building on previous work in the region, scientists used Nereus to prospect for new hydrothermal vent sites. They also sought to extend our understanding of the limits to which life can exist - and added to the understanding of how geologic processes might generate the prebiotic materials believed to have been an essential precursor to life on Earth, and to help prepare for future efforts to explore for life on other planets.

Using the A-frame and a MacArtney fibre optical ROV winch system from the UNOLS East Coast Winch Pool, the Nereus was effectively deployed on multiple dives during the cruise - in AUV as well as in ROV configuration. The articulating capacity of the A-frame made launch and recovery as well as on-deck maintenance and reconfiguration of the Nereus easier, more convenient and safer for the Falkor ROV operator team. In essence, the articulating A-frame system provides easy access to the top of the frame, enabling operators to prepare the Nereus for launch, while working at deck level.

“The MacArtney A-frame and CTD winch have been reliable and versatile systems onboard,” said Pete Zerr, Schmidt Ocean Institute’s Deputy Director of Marine Engineering, “they are essential for overboarding a variety of scientific equipment and instrumentation critical to our mission to better study and understand ocean systems.” 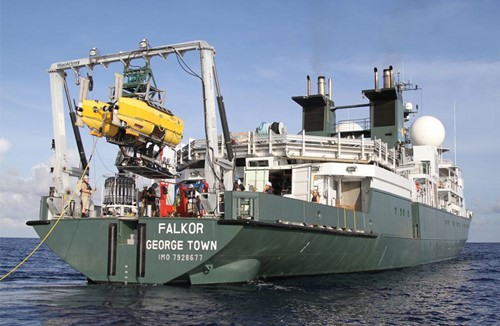