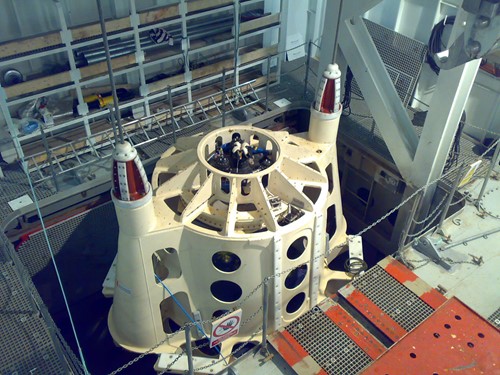 Normally, ROV systems are launched from the aft of a vessel or over one of the sides using Active Heave Compensation winches that allow them to operate in heavy seas. When Acergy acquired the Skandi they envisioned a system that could go beyond the current limit and designed a launch and recovery system that would launch ROVs through a fully automated moon pool system in the centre of the vessel.

Often the most risky part of an ROV dive is the launch and recovery. Winds and sea swell have an enormous effect on the launch, operation and recovery of tethered vehicles from a vessel.

In heavy seas, pitch and roll can alter the position of a vehicle in relation to the water by many metres in seconds, causing potentially damaging snatch loads.

Launching the vehicle from the centre of the vessel minimises the effect of sea conditions as the centre is the most stable place in regard to both pitch and roll. It also provides protection from the wind.

The system of winches and sheaves used to launch the ROV through the centre of the vessel employs three different types of winches that run at different speeds. The control system includes functions, such as opening and closing the moon pool doors and automated ROV orientation and emergency recovery features. Making this design work together as a fully automated system required precise, advanced engineering and project management.

This MacArtney made system synchronises the functions and performance levels of the entire system whilst integrating a host of non-MacArtney supply features. The easy to use interface proves that even complex systems with sophisticated launch and recovery sequences can be user friendly. Once the parameters have been set on the Graphic User Interface, the fully automated launch and recovery sequences can be set in motion with just a few button presses.

Already from the initial contact from Acergy, engineers and experts at MacArtney recognized that this system was destined to perform like no other. Months on, the system is performing excellently and Acergy is very happy with the performance so far.